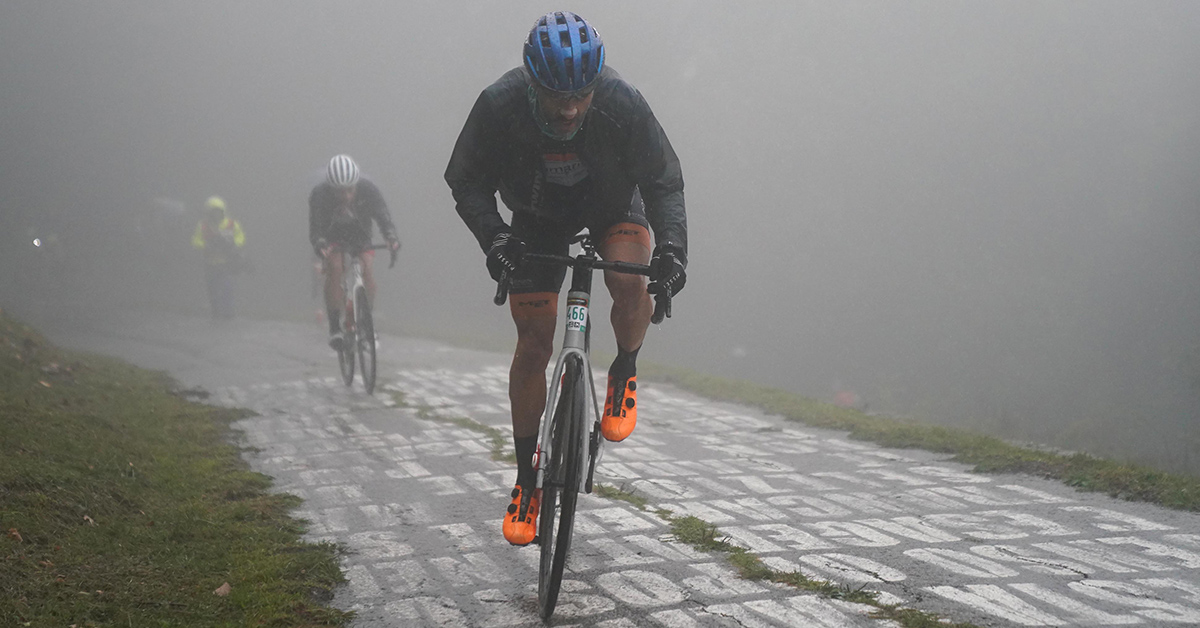 1,700 riders line up at the start and patiently wait for the flag drop, all bunched up in a multi-coloured mass, made of hundreds of jackets, sleeves, helmets and miscellaneous rain gear, lit up by a galaxy of red backlights shining through the still-dark morning air.

They’re waiting to take on this little challenge, that will last 111 km and face them with 1,700 m elevation gain, making them tackle two amongst the world’s most (in)famous climbs.

They’re waiting, the air so humid and the mood so electric one might see sparks flying, until the countdown will bring on the race and they’ll ride on.

The front line clears away quickly, as usual.

I learnt the hard way that it would be quite the tragic mistake to give in and try and keep up with those breakaways; better, much better, essential I daresay, finding one’s own pace, let other pass by and settle in with a group one is comfortable riding with. The more so at the start, the more so with such challenging sections at the horizon.

It doesn’t take long for everyone, fast or slow, to realize that today sitting on someone else’s wheel, a classic go-to comfort zone for cyclists, won’t be that comfortable after all. The closer you shadow the rider in front of you, the less drag, but the more water you get splashed onto your face from their rear wheel, on top (forgive the pun) of the water falling from the sky. What to do, what to do?

In medio stat virtus, I’d argue. Drafting, as it’s hard to completely shed good old habits, yet just a little off to the side, this way one eye gets sacrificed to the constant upsplash from the wheel we’re following, and the other one gets, hopefully, some respite from the watery torture and is able to see ahead.

With this hybrid, albeit unorthodox, technique, and while riding with the “right” group, it’s high time to tackle the Sormano climb. Not quite the famous muro itself, but the ascent leading up to it. It might not be common knowledge amongst the laymen, but the Muro di Sormano doesn’t just take off from flat, thus preventing riders from bringing some momentum into the attempt: it’s instead the final stretch of a 5 km long ascent, that most likely already took its toll on lungs and legs alike.

As soon as one sets foot (well, wheel) on it, one will immediately realize why it’s one of the most wondrous locations of the cycling world, that will, over the 2,000 m the Muro stretches, bring out everything that makes cycling great, and will leave the rider with ever-lasting memories.

The climb is especially arduous today: the incline ranges from 20% to 25%, the slippery tarmac makes standing up on the pedals unadvisable, we’re sat and we’re gripping the handles tight, our knuckles white beneath the drenched gloves. The climb thus transcends mere physical activity and becomes an exercise in meditation, every rider metaphorically cocooned inside their own “bubble”, trying to control their breathing and managing the ever-slippery balance between fatigue and stamina, wrapped up in cold fog, trying neither to paddle too much lest they lose the rhythm, nor to miss a stroke lest they have to unclip a foot (every rider knows the shame).

And so, one stroke at the time, everyone sheltered in their own trance, we notice every leaf lying on the road, glistening in the morning rain, and time and space slow down so much we could almost count them all.

The leaves are dead, and yet, to us, they’re so bright and very much alive. 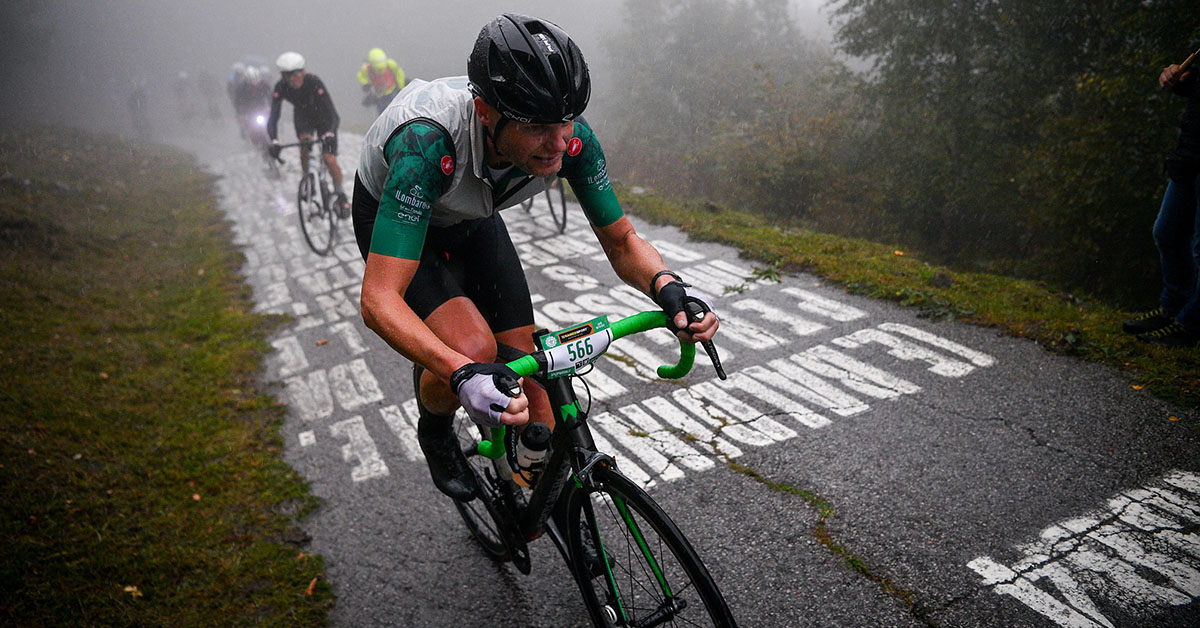